With the crazy development of virtual reality technology in the last 3 years, now we can see the appearance of 360 degree science everywhere: student can learn history from 360 degree film , Youtube now supports 360 degree format as a common way to enjoy video, Facebook invest 1 million dollars in developing 360 degree technology …   With the actions of a lot of famous technology leaders, we can expect a bright future of virtual reality as a revolution in every industry. In this small post, I just want to give you a top 7 best 360-degree video player  in  that I had to test more than 200 apps and software on PC, android phone and iphone also, record the performance before choosing this 7 awesome apps.

But before jumping into this awesome list, I think you need to “warm up” your body first with some basic knowledge about virtual reality technology:

What is 360 degree video?  It is an immersive video which is record by a special camera, after recording the video, we can watch that video by VR player on VR device. It’s very different between a 360 degree video and common video.

How a 360 degree camera works? You can understand how a camera can record this special video by reading that post.

After downloading video from Youtube or recording 360 degree video by your androidsmartphone, you need to play it on your smartphone or desktop. So which is the best player software for 360 degree video? You can find thousands of app on the Internet but no one can ensure the quality of them, some even contain virus that harms your computer. That is the reason why I create this post to show you the comparison of some good player app in the market now.

When we talk about 360 degree video player, we can’t forget Kolor Eyes  which is the best app ever on smartphone and PC as well. This software is developed by Kolor Eyes, a virtual reality leader in the world with more than 5 years experience in this industry. In this year, Kolor Eyes has launched more new versions on Android, Iphone, Desktop and Mac. With weekly update, this is truly the best of the best for 360 degree video player, you can get all of new functions for your device with an up-to-date player like this.

Now there are 3 millions downloads on Google play, App store … so if you want a truly 360 immersive player, download it now.

In fact, 360 VUZ has both android and IOS version but according to the virtual reality community, this app perform extremely well on anroid devices. I have test on a lot of android smartphones and see that it runs smooth, no lag and the output videos have good quality. You can enjoy the video and control the view by using your finger on the screen, your finger will change the direction and give your a wide range of sence. 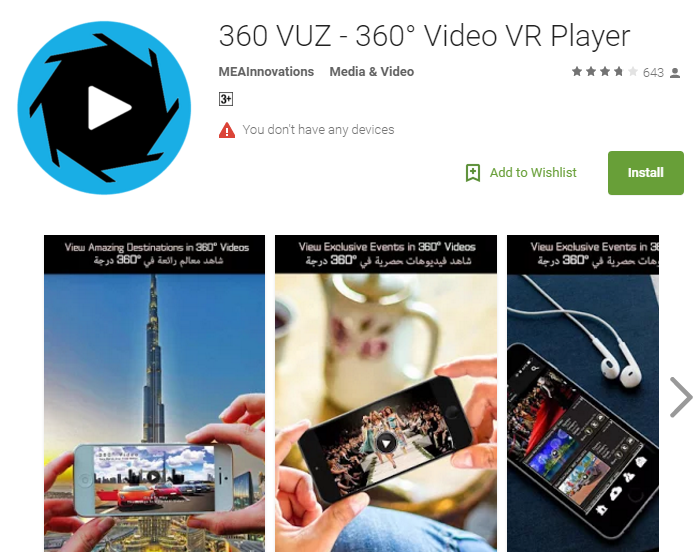 You can easily share your video on social media network like Facebook, Tweeter …. with Sharing function of 360 VUZ.  The average review score is 3.8 with 372 5-star rating, so if you have a android phone and want to experience 360 degree video, this app is very good for you.

If you want to have a fantastic immersive video experience, this app will help you do it. This app belongs to Finware.Ltd which is a famous media and entertainment company, in 2015, they launched this app. After installing this app, you can simply control the viewing direction by moving your finger on your smartphone screen. The feature that I like most from this app is that you can watch a 360 degree video online without download it to yourphone, this function called VR stream. 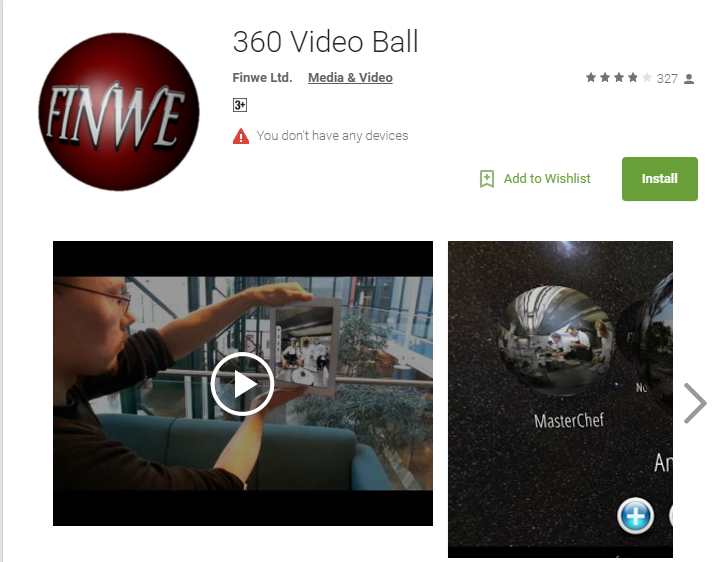 The average rating score is 3.9, a litle bit higher than 360 VUZ. There are 169 5-star-rating for this app. You can download it today from Google play free.

Panfram is a well-know video player from Mindlight, which is specialized in high quality video resolution and 360 degree video. You can easily find it on Appstore, Google play ,TV …

If you have a lot of high quality 360 degree video such as 1080i, 4K … and want to enjoy highest solution for virtual reality technology, you can’t miss this app. You can download it from Google play, App store today free.

5. Total Cinema 360 – The player that brings the Cinema to home

Total Cinema 360 is ultimate choice for you to build a cinema at home. This app is far development from just a simple 360 degree video player, it is a system that transforms a simple 360 video become virtual reality. From 2015, there are nearly 5million downloads for this software. You can download it today.

This company is not only creating 360 degree video player but also allowing you to download video, so you will have an A to Z system when participating this community.

If you are a virtual reality fan, this is a simple and basic 360 degree video player for you. You can use it on a lot of different platform such as mobile, desktop software, website … but I highly recommend this software for website. It can be embeded well on your website

Now, it is your turn, in your experience, what is the best 360 degree video player?  Feel free to comment here.

Base on your demand and status, you can choose for yourselft the best 360 degree video player. I hope that my collection can help you choose the choice.